If we actually were inspired to read the Constitution, how would we feel about it? 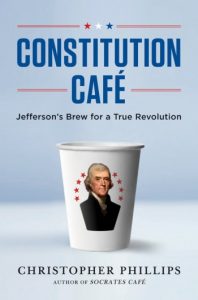 It’s the name of a book by our founder and executive director Christopher Phillips, and also an ongoing dialogue project that has touched a chord across the nation — and nowhere more so than at a school district in San Antonio, Texas!.

At our mini-Constitutional Conventions which bring together people of many ages and experiences and perspectives, we hold thoughtful and impassioned exchanges about what we think the Constitution says on any given subject — on privacy rights in an age of pervasive social media, for instance, or on whether corporations should enjoy the same First Amendment rights to free speech as individuals.

But our explorations also include an ‘aspirational component’ — meaning we also examine what we would like the Constitution to say on such weighty subjects. And to do that, we  put on our Framers’ hats and craft ‘new’ constitutional articles.  Not only that, there is an ‘activist’ component — meaning, we ask ourselves and one another what we’re willing to do to make the big constitutional ideas we have in mind a reality.

Taken together, these various elements of Constitution Cafe cultivate greater constitutional and civic literacy, as well as a keener sense of and appreciation for citizenship. They also serve as a springboard for much more involved civic engagement by participants.

Check out the following links with our amazing partners at East Central Independence School District in San Antonio, where Constitution Cafe is seen as a critical means for inspiring and equipping students to continue on to higher education:. So far there are Constitution Cafes at East Central High School and Legacy Middle School, with more coming as this project becomes viral, spilling over not only into other schools, but the San Antonio community as a whole..

These YouTube videos were put together by the East Central students themselves:

Constitution Cafe at East Central: An Interview with Christopher Phillips